Where were you when the world stopped turning on that September day?
Were you in the yard with your wife and children?
Or working on some stage in LA?
Did you stand there in shock at the sight of
That black smoke rising against that blue sky?
Did you shout out in anger
In fear for your neighbor?
Or did you just sit down and cry?

Did you weep for the children
Who lost their dear loved ones
And pray for the ones who don't know?
Did you rejoice for the people who walked from the rubble
And sob for the ones left below?

Did you burst out with pride
For the red white and blue
And the heroes who died just doing what they do?
Did you look up to heaven for some kind of answer
And look at yourself and what really matters

I'm just a singer of simple songs
I'm not a real political man
I watch CNN but I'm not sure I can tell you
The difference in Iraq and Iran
But I know Jesus and I talk to God
And I remember this from when I was young
Faith, Hope and Love are some good things He gave us
And the greatest is Love

I'll never forget. I had just completed a pacemaker battery change, just 6 months after starting my current job... "a plane hit a building in New York," the lab techs told me. At first disbelief, then shock as a second plane hit, then gripping empathy for those in the buildings, then sadness as it all came to an end and eternity started too soon for so many. 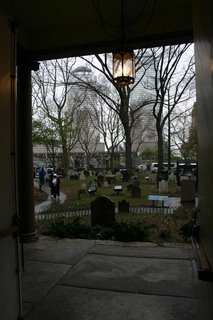 View outside St. Paul Chapel's front door looking toward where the twin towers once stood. 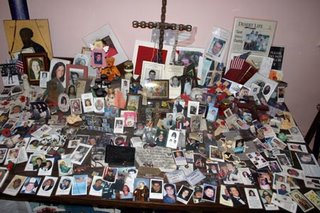 A few of the photos of those who died that day

But what was most remarkable after this devastating loss was the incredible outpouring of generosity, kindness and love between total strangers of all races, color and creed. A call to action by those who cared. And not just here, but a world-wide outpouring of solidarity, resolve, and acts of kindness that went above and beyond the expected. The Red Chasuble of Father Mesa, a Roman Catholic priest who volunteered in St. Paul's Chapel across from the site of the World Trade Center and upon which rests patches of the volunteers who responded to the call to help: 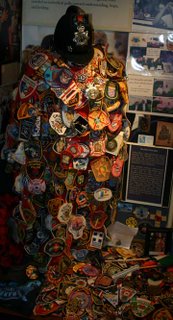 And there was a sudden, pressing need to tell those we loved how much we loved them, to remind ourselves how fortunate we are in this wonderful country. 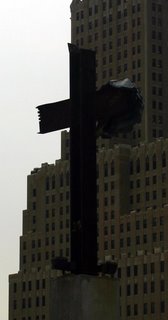 The last standing beams from the World Trade Center


God bless those who died.

Take a minute and remember.

Dr. Wes, this was beautiful. Thank you for posting it! I think I have listened to Alan Jackson sing that song about a thousand times in the last 5 years.

We must NEVER forget what happened!