Robots: The New Globalization of Medicine?

There's a tremendous interest in robotics aiding medical care recently. Hospitals are rushing for the DaVinci system to perform intricate surgical procedures through tiny openings in patients abdomens and thoraxes. I had the opportunity to review two new contenders for robotics in the catheter ablation of cardiac arrhythmia arena: Hansen Medical (see pictures below), and Stereotaxis, Inc. Both offer a means to steer an ablation catheter within the heart, most importantly, the left atrium of the heart. 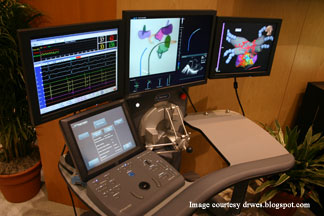 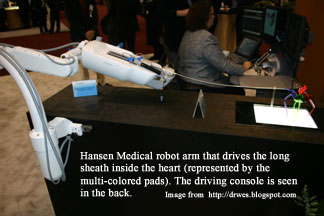 You see the left atrium is the focus of significant attention lately because of inroads to successfully ablating (another word for cauterizing) the most common arrhythmia in men and women: atrial fibrillation. And in 2004, the number of catheter ablation procedures to cure atrial fibrillation worldwide was estimated to be approximately 10,000. In 2007, it is estimated that the number of these procedures will approach or exceed 100,000. The problem is, these procedures are time-consuming and carry significantly more potential risks to the patient than non-invasive medical therapy, yet carry the promise of better long-term treatment of the disorder (i.e. a 70-80% of curing this disorder).

An atrial fibrillation ablation procedure requires an amazing array of instrumentation and equipment to perform safely today. Procedures in most centers last from 2.5-5 hours in duration, liimiting the number of procedures that can be performed by an individual operator per day due to time and operator fatigue constraints. Enter robotics. These devices promise to be able to steer the ablation catheter within the left atrium with remarkable dexterity using a virtual model displayed for the doctor on four or five computer screens. The Hansen Medical system uses a virtual joy-stick-like arrangement to steer the conventional catheter through a specially-designed (approximately $2000) sheath that steers the deflectible catheter using a mechanical drive motor, that can rotate, pitch and yaw the catheter to different locations (outlay price for hospitals not disclosed at the meeting). The Sterotaxis system steers a soft, noodle-like catheter containing a magnet inside the catheter using a forceful (0.8 Tesla) magnetic field that changes its direction by moving two huge magnets on opposite sides of the patient's body (Hosptial capital outlay: about $1.2 million BEFORE contruction costs, special non-magnetic outfitting with equipment in the patient's room, etc.). Where the catheter is placed is again determined by a virtual rendition of the heart on a bunch of computer screens.

Both of the systems use a 3D image of the left atrium obtained from a CT scan merged with their software to move the catheter, but also use some fluoroscopic localization to assure proper placement of the catheter. Like surgical robotics, the surgeon's skill to initially place the catheter within heart and the chamber of interest must be maintained (it won't do this for you). Furthermore, the image used to navigate is static, unlike the normal heart which beats and moves in space with the movements of respiration. Hence good ol' xray naviagation remains to confirm location as the catheter is moved.

The one big advantage for the physician is the promise of being seated and outside the room as the catheters were advanced. Remarkably, there was a demonstration at the Heart Rhythm Society meeting of a physician in Boston, Massachusetts steering the catheter within a patient's heart in Milan, Italy. Globalization gone wild, I'd say. But the implications are nontheless important to grasp. Will there be large "surgicenters" performing the intricate part of the procedure from India? Italy? China? Perhaps a doctor will place the catheters in his patient's heart, then sip coffee as his colleagues in Milan place a curative pattern of cauterizations within his patient's heart chamber. It's analogous to waiting for the dishwasher to complete it's work before putting away the dishes.

Gratefully, noone has figured out a way to reimburse physicians who provide this service..... yet. And importantly as we've seen in the airline industry, medical care is not like flying an unmanned drone, it's more like flying a 747 across the ocean: a team of pilots an crew are still needed to have the patient arrive at their destination safe and sound.

"There is no thing endowed with life - from man, who is enslaving the elements, to the nimblest creature - in all this world that does not sway in it's turn. Whenever action is born from force, though it be infinitesimal, the cosmic balance is upset and the universal motion results. "
-- Nikola Telsa, 1925
Posted by DrWes at 5/21/2006 06:33:00 AM

Great article. I heard that the cost of the disposable sheath for Hansen was going to be $1,600. Also, I think only the Hansen System employs robotics to move catheters, the Stereotaxis system uses a magnetic field to accomplish this.

Sterotaxis does move the catheters with a magnetic field, but a small motor drive is still used to advance and withdraw the catheter.