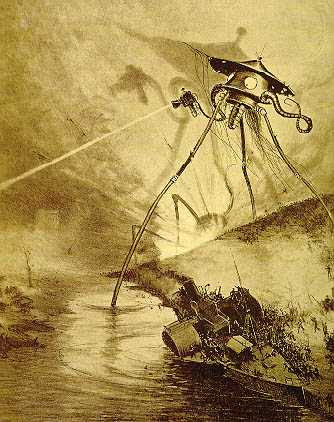 The news grows more frequent and increasingly ominous as a cylindrical meteorite lands in Grover's Mill, New Jersey. A crowd gathers at the site and events are related by reporter Carl Phillips. The meteorite unscrews, revealing itself as a rocket machine, and onlookers catch a glimpse of a tentacled, pulsating, barely mobile Martian before it incinerates the crowd with Heat-Rays. Phillips' shouts about incoming flames are cut off in mid-sentence. (Later surveys indicate that many listeners heard only this portion of the show before contacting neighbors or family to enquire about the broadcast. Many contacted others in turn, leading to rumors and confusion.)

The War of the Worlds Radio Drama by Orson Welles Plot Summary
This 1938 coupe was a classic example of how mainstream media can manipulate their audience. As we all know, these examples continue today and should serve as a powerful reminder to medical students, residents, doctors, nurses and ancillary health professionals how all sorts of instantaneously-available information, be it health care information or otherwise, can be shaped, manipulated, processed and pureed.

How about this: once again, the mainstream media's darling, The New York Times, gets punked.

Totally creative and hilarious! I started with a link from Ramona and ended up here. :)

OP.S. And remain a bit confused for what the story was or was not? :)

Now going back to see what I missed.