A Pacemaker on a Chip? 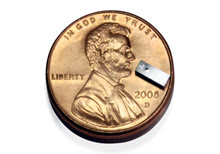 So far, Medtronic has developed most of the components—a circuit board, an oscillator to generate current, a capacitor to store and rapidly dispense charge, memory to store data, and a telemetry system to wirelessly transfer that data. The company has used chip manufacturing technology to assemble these components onto a wafer. Oesterle estimates that 60 to 70 pacemakers can be made from a single six-inch wafer, which the company creates at its own wafer fabrication plant in Arizona.

"What we don't have that is fundamental to a pacemaker is a way to power the chip," says Oesterle. The company is working with startups that make thin-film batteries and other innovative power sources, though Oesterle declined to give further details.

Oh, and don't forget the need for a fixation mechanism. Otherwise, these things might embolize and serve as the next Viagra.

i must admit i do not understand this research. as someone with a pacemaker that interacts regularly with other folks that also have them, i do not hear complaints that they are too big- people with pacemakers simply want a device that is long lasting, reliable, and not a hindrance to leading a normal life. my current pacemaker meets most of those goals. it seems to me that instead of the research looking to make the devices smaller it should make them last longer. i am 32 years old and am on my 3rd pacemaker. research a pacemaker that uses the same kinetic technology my watch does- that would seem to me to make sense.

never mind- i just noticed the link and read the article you were linking too ... anyways- thought i would still share my perspective