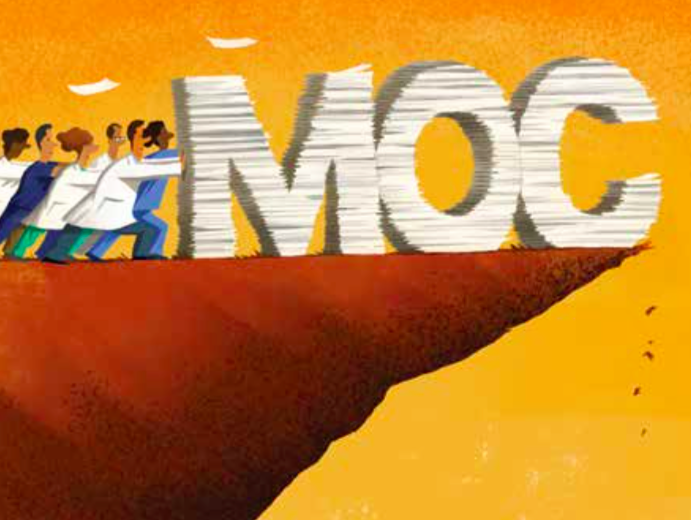 Yesterday, I read with interest the American College of Obstetricians and Gynecologists widely circulated piece authored by Lucia DiVenere, MA entitled, "MOC: ACOG's role in developing a solution to the heated controversy" published in the August issue of OBG Management. By carefully listing the numerous physician concerns with MOC (costs, relevance to practice, lack of data to improve care, relationship to licensing, employment, privileging, and reimbursement), the article reinforced many of the issues on this blog while being simultaneously crafted to sound as if ACOG was really "listening" to physicians concerns about ABMS Maintenance of Certification (MOC).

It didn't take long for me to realize the article was really about the tired trope that the "ACOG asserts the importance of maintaining self-regulation." The leadership within the ACOG and Ms. DiVenere herself can hardly be described as "self" as far as working physicians are concerned. Ms. DiVenere is Officer, Government and Political Affairs, at the ACOG and OBG Management contributing editor. And while she "reports no financial relationships relevant to this article," her very job may have depended on writing it.

Which leads me to MOC's Greatest Lesson that it consistently teaches working physicians, both young and old: In medicine, it is okay to lie, cheat, and steal.

I do not say those words lightly. Everything MOC touches is corrupt. For a once simple medical accolade to be allowed to secretly morph into a one-billion-dollar-a-year enterprise and physician cudgel to fund the bloated bureaucratic and political aspirations of the Accreditation Council for Graduate Medical Education is beyond me. Yet this is precisely where working physicians find themselves. Are these the ethics to which we want our young doctors of tomorrow to aspire? Should they model turning a cheek the other way to ignore the implications of these actions on our patients just so specialty societies can maintain handsome salaries, political power, and "self-regulation?"

Despite all that has been uncovered by following the money, I still can't believe it's taken one simple GoFundMe page three months to raise $150,000 from working physicians to fight this corruption.

It seems MOC's Greatest Lesson has been taken to heart.