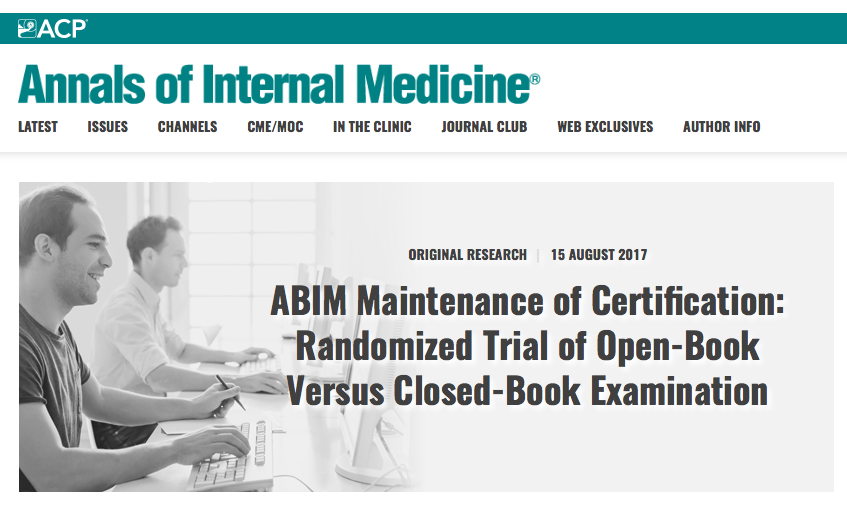 On 15 Aug 2017, the editors of the Annals of Internal Medicine published the Study "Effect of Access to an Electronic Medical Resource on Performance Characteristics of a Certification Examination - Randomized Controlled Trial" that was heavily marketed front and center on their website using the happy physician testing picture shown to the left.

The article touted a comparison between open book vs. closed book testing that was conceived exclusively by the American Board of Internal Medicine and executed by their conflicted corporate partners at PearsonVue and a new $10.5 billion corporate heavyweight from the Netherlands, Wolters Kluwer. In a veiled attempt at full disclosure, the conflicts of interest of the study were carefully articulated in a lengthy disclosure statement hidden behind a paywall. True to form, nearly all of the editors of the article claimed "no financial relationships or interests to disclose."

Most internists in the U.S. know these editors' disclosure is little more than fake news. The Annals of Internal Medicine is an academic medical journal published by the American College of Physicians (ACP). On its last available Form 990, the ACP earned over $24.6 million in a single year selling their Medical Knowledge Self-Assessment Program to US physicians to study for their board certification and recertification examinations. Even the accompanying editorial was written by ACP's former senior executive vice president, Steven E. Weinberger, MD, who disclosed he was an employee of the ACP and earned royalties from authored material on UpToDate.

In addition, the supplement supplied by the authors had portions of the recruiting notice redacted so avoid true disclosure. But when a copy of the actual recruiting notice is revealed here, it is clear that PearsonVue had more than a minor role in the research and had access to the study registrants' names, addresses, and probably more.

Each of the 825 physicians enrolled in the study received $250, costing US physicians (who unwittingly funded the ABIM Foundation) $206,250 for "incentive payments" for this study, not including the time and salaries of those who conducted this study for the ABIM's benefit. None of the participants were told about the financial benefits to the ABIM, PearsonVue, Wolters Kluwer, or their content creators for participation in this study.

Such conflicted "research" published in an academic medical journal that misleads the public and US physicians represents little more than a free advertisement for the financial agendas of these colluding organizations and sets and incredibly low (and untrustworthy) bar for all of academic publishing.